Let’s see how the Caesar Cipher can be implemented very simply in Python.

One of the simplest methods to create secret messages is undoubtedly the Caesar Cipher. As you might expect, it’s named after Julius Caesar, who used it in his correspondence.

To encipher a message, we choose a whole number and shift every letter down the alphabet by that number of places.

For example, if we choose 3 then B becomes E, M becomes P, and Y becomes B; after Z we start at A again. 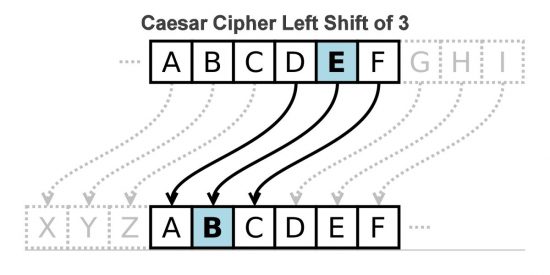 To decipher the message, we just shift the letters back again.

To code this in Python, we’ll use remainders.

If we number the letters from 0 to 25 (always count from 0 in Computer Science!), then we just add the shift factor. If we then take the remainder after dividing by 26, 26 becomes 0, 27 becomes 1 and so on, meaning that A comes after Z.

In Python we can turn a letter into a number using the ord() function, which produces the ASCII code corresponding to a letter.

To deal with this, we can employ a nice trick called conjugation. We move our numbers back to start at zero, perform the shift, then move forward again. Finally, we convert back to a letter using the chr() Python function.

See the short Python program to accomplish this.

Working with Files in Python

Those who know a little more Python might like to adapt this to take input from a text file and output to another text file.

This lets you encipher a whole letter or even a book in a single pass. I like to set this challenge at Christmas and give my students a copy of Charles Dickens’ “A Christmas Carol” from the Project Gutenberg Project: has text files of many classic out of copyright classic books, in several languages. This method of creating secret messages is not very secure. Short messages can be deciphered by just applying all 25 possible shifts and reading the output; longer ones can be attacked by a method known as frequency analysis. 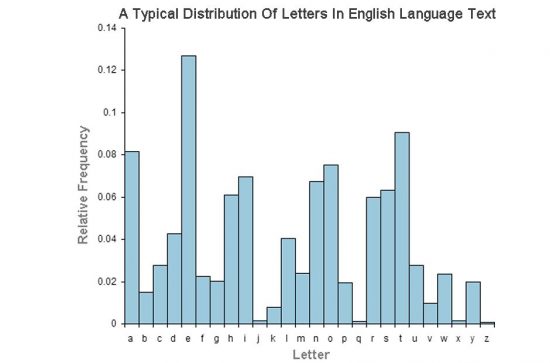 Relative Frequencies of Letters in the English Language Graph

This gives us the shift and we can now read the message.

Next issue of Hello World, we’ll look at how to perform frequency analysis on a file.

Mark Thornber has been a maths teacher at Durham Johnston for the last 25 years. Mark has been interested in the mathematical parts of computing since owning his first ZX81.