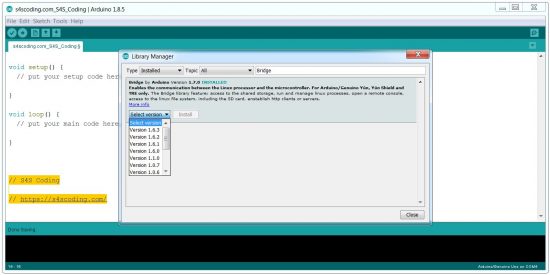 If an Arduino library has only one version the “Version” menu won’t appear.

If a library is currently running the latest version the “Update” button won’t appear, but you can downgrade/rollback to an earlier version of library code (if available) via the “Install” button if an update doesn’t work for your program/sketch.

Once finished, an Installed tag will appear next to the Arduino Bridge library and will show the new version number (v1.7.0) and under the “Version” menu all the old versions are available (like v1.6.3) and only the “Install” button is available which allows for a downgrade.

We can close the library manager after updating.