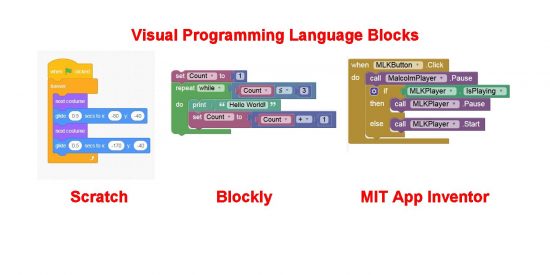 You can see in the image above showing Scratch Blocks, Blockly Blocks and MIT App Inventor 2 Blocks they are similar in design, making moving between them far easier than learning many non-visual programming languages.

As part of the App Inventor 2 Course in a Box Tutorial (an App Inventor starter tutorial) there’s a sample App Inventor project called “I Have a Dream” soundboard app (app blurb below). 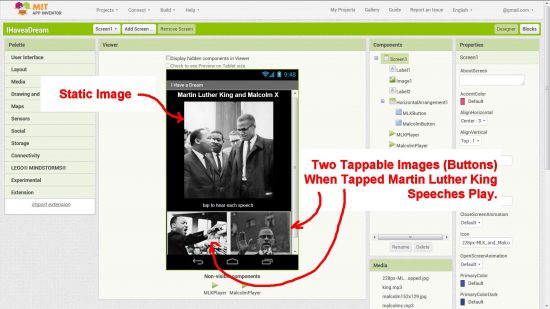 MIT App Inventor 2 I Have A Dream Android App

Build the “I Have A Dream” App.

“I Have a Dream!” is an educational “soundboard” app that plays the famous speech of Martin Luther King. Its a great way to get started with App Inventor and programming.

It’s a simple Android app consisting of three images, two of which are buttons which when clicked play a Martin Luther King speech.

From a learning Android app development in the classroom perspective it’s the visual language block based code which makes the tool accessible to the school environment: the teacher doesn’t have to be a software engineer to use App Inventor 2 as a teaching aid. 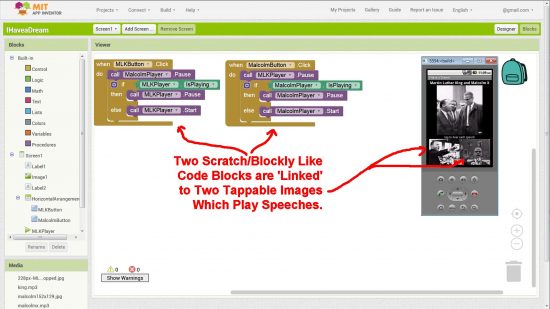 Like Blockly and Scratch it’s really easy to use: relative to learning to program in Java, Javascript etc… Simply drag n drop code blocks to build an android app.