In 2014 primary school children in the UK were introduced to the principles of computer programming/coding via the new UK National Curriculum. The UK government finally recognized the importance of coding skills for young children who will be the next generation of computer software engineers. 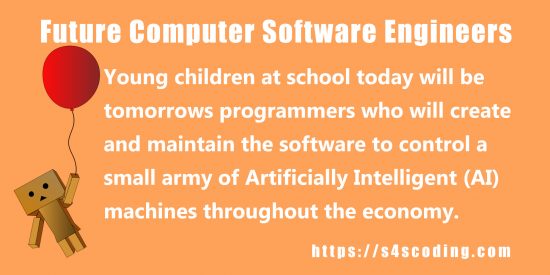 Young kids at school today will be tomorrows programmers who will create and maintain the software to control a small army of Artificially Intelligent (AI) machines throughout the UK economy. The UK will need a LOT of new computer software engineers if we are to fully embrace the new technology.

Unfortunately a poll in 2016 suggests 2/3rds of teachers lack the skills to teach coding in schools. Though the UK government is investing in teaching coding, it’s never enough and primary school teachers in particular need help.

Fortunately there are some awesome visual programming languages like Scratch which are ideal for the primary school environment.

Scratch 3 is the latest version of Scratch which is due for release just before the new September 2018 school term.

Scratch 3 is currently in beta version with a partially working Scratch 3 preview.

At the time of writing (April 2018) there’s quite a lot of disabled features in the Scratch 3 preview, (not ready for school use) essentially it’s a significantly improved version of Scratch 2. Scratch 2 is great, but it has it’s limitations.

Although Scratch 3 isn’t ready for school use, the current Scratch 2 program is and moving from Scratch 2 to Scratch 3 later this year should be painless: still the same basic premise of dragging blocks around.

From an individual primary school student perspective Scratch is awesome, has loads of free coding examples (over a million new projects in the month of March 2018 alone!), includes a well supported community (800,000 new Scratch users in March!) and the program is very easy to use and a lot of fun.

From a primary school teacher perspective there are some major limitations.

I believe the above limitations is why relatively speaking there’s a small number of primary school children using Scratch.

You can see in the graph below in March 2018 there were 63,000 Scratch users which registered age 5 years. 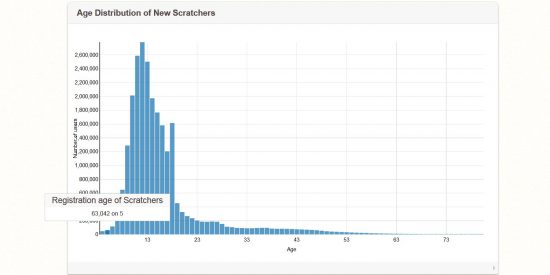 Age at which a user first registered:

Scratch needs a teacher dashboard with the ability to track student progress, build a curriculum based on the UK National Curriculum.